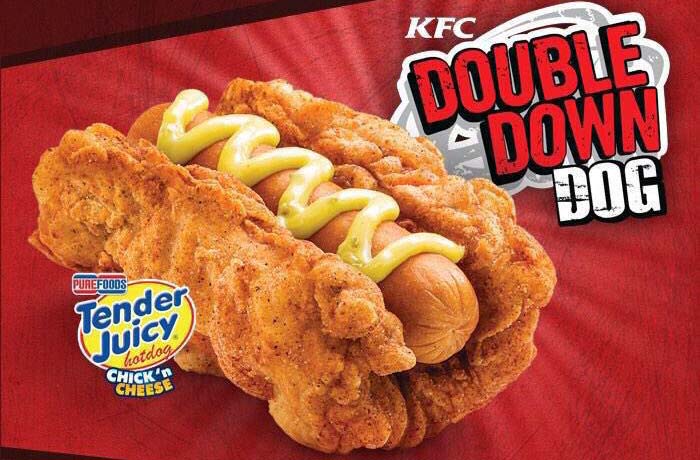 The Allen School Blog loves to poke fun at the abysmal eating habits of the American public.  We’ve covered such culinary travesties leading to heart disease, obesity, diabetes, etc such as the Heart Attack Grill’s Triple Bypass Burger, Taco Bell’s Waffle Taco, and KFC’s redonculous Double Down.  You remember the Double Down, no?  A bacon and cheese sandwich with two fried chicken breasts where the bun should be and a mayo-based “special” sauce which is sourced by scraping the hardened arteries of heart attack victims.

Well, KFC has seemingly doubled down on the Double Down (quadrupled down?).  They’ve announced a new nutritional abomination known as the Double Down Dog which is essentially a cheese dog with a fried chicken breast for a bun.  Gawker.com, always colorful in its reporting, described it as:

“Close your eyes and imagine: chicken entrails blended and stuffed into a fleshy, pill-shaped sac, then infused with a savory cheese-inspired paste. Wrap that nuclear taste missile in a slab of breaded poultry, top it with a drizzle of deli mustard, and launch it careening toward your own gaping maw. Do you like it? You’ve just been Doubled Down, Dog, courtesy of KFC.”

Of course, as a training school offering a well-respected nursing assistant course among other healthcare-related educational offerings, we couldn’t be more pleased about this seeming race to the fattest bottom.  The more people in America eat this supremely unhealthy fare, the more cases of heart disease, obesity, hypertension, diabetes, and other dietary-related ailments there will be and that translates into more job opportunities for those with a certification in nursing assistant, medical office assistant, and others.  Of course, we’re joking, but nevertheless, this is indeed a true story!  We should take this opportunity to urge all our readers to eat healthily and exercise.