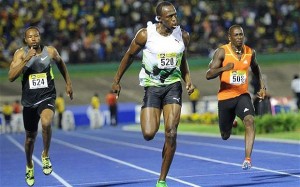 The nature of health care giving and Olympic athletics has remained unchanged for centuries.  Medical care givers like nurses and medical office assistants have to be diligent, caring, competent and kind to succeed.  Olympic athletes need to be conditioned, determined, and in top physical shape to find success.  Yet, the unceasing march of technology and science has had an amazing transformative effect on both these occupations.  For the modern nursing assistant, there is a world of new medical technology and practices that didn’t exist 100 years ago and which they must be educated on in order to be effective.  For Olympic athletes too, science has provided astounding leaps in performance.  When the first Olympic marathon took place in 1896, it was believed that such a run could be deadly for the athlete.  That year only eight of the first Olympic marathon runners finished the contest successfully.  A horse groom named Spiridon Louis from Greece won the race in 2:58:50.  112 years later In Beijing, Samuel Wanjiru of Kenya won the marathon on a sweltering day with a time of 2:06:32.  In but 100 years, the Olympic marathon winner bested the original winner’s time by 29% even in spite of the modern race course being more than 2 kilometers longer than the 1896 course. Science has been steadily improving the abilities of Olympic athletes.  In a fascinating article at Wired.com, the lengths to which scientific study has been used to enhance athletic ability are examined in depth.  Read about how US hurdle champion Lolo Jones is using a team of 20 researches with state-of-the-art high speed cameras to deconstruct her performance as part of her training for the upcoming Olympic games in London.  It is amazing to learn about the sophisticated science being used to make runners faster, jumpers higher and swimmers sleeker.  The same rapid advance of science is also at work in the medical field and Allen School is dedicated to turning out graduates with training in the latest and greatest medical science has to offer.