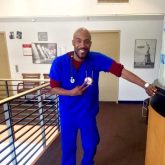 I was at a very low point in my life summer 2015. I kept asking myself, “Is this what my life has really come to?” I was 40 years old and had run the streets most of my life, in and out of prison until 2008. When I was released from prison that year, I earned my GED and immediately enrolled in a nursing program at Harry Truman College in Chicago, Illinois. In 2013, I moved back home to NYC and ended up back in the streets, but only worse…..I was now using drugs, as well. One day, I prayed that God would guide my path to greatness. I went to a doctor’s appointment and had a conversation with the MA who told me about the Allen School. I called the school and spoke with Linda Commodore. She encouraged me to come in and register after hearing my whole story on the phone. I came, registered, and started classes August 10, 2015. In the beginning, classes were hard, and I struggled because I was also fighting an addiction that was finally kicked by the third module. I can’t say who my favorite teacher was because each of them had different elements that I loved. They were all my favorites…..Miss C, Mrs. B, Ms. Pollidore, Ms. Brooks, Mr. Hamilton, and Ms. Townsend. I saved Ms. Townsend for last because she pushed me the hardest and stayed on me like “white on rice.” I would walk into Jameson’s office and pour out all my troubles. He never turned me away, always giving me stern advice, but always listening to me. He doesn’t know it, but to me, he wore two hats – Student Services and Counselor. Then, my Mod 5 class met Martha. I would see her previously speaking to other students because she has such a warm and comforting spirit. Martha worked with me vigorously during my 5th mod and when I went onto internship. While on internship, she would talk to me about my problems, concerns, just everything. I don’t think I could have done it without her – seriously. So, I graduated June 3rd, 2016, and started my career at Housing Works Clinic (my internship site). I am now clean of drugs and work between 3 different clinic sites. I am also enrolling in a CUNY nursing program that my job will pay for. I know if I can do it, so can all of you. God changed my life with the Allen School being the vessel to do so.
Tap Here to Talk to Us
1 (888) 620-6745
Live Chat
Your door to a new career in the medical field starts here. Become a healthcare professional in 2023! Learn about our accelerated online/campus-based program and finish in less than a year ! *To learn more about COVID-19 and necessary health and safety precautions, you can obtain information on the CDC’s COVID-19 website..Learn More
+