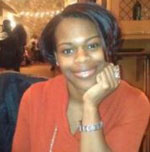 I started at the Allen School of Health Sciences in September 2012 because I knew it was time to create a better life for myself and my children. When I went in for the orientation, our module had to pick a cause that we wanted to bring awareness to and homelessness was chosen by the majority. I must admit that I wasn’t too thrilled about it because I am more passionate about sexual abuse, being a victim myself. I was still willing to help so I did some research on homelessness. It touched my heart to find out how many women and young girls became homeless due to sexual abuse, and domestic violence — that’s when the cause became personal. A group of us went to work to raise funds for our cause. We raised $600 and the Allen School thankfully matched that amount and we were able to donate $1,200 to the Providence House. Mr. Armand found the Providence House and I believe it was fate that led them to us. They work with women to get them on the right track to becoming productive members of society. I decided that I did not want to end there and I chose to continue working with the Providence House to collect toiletries and make care packages for the women for Mother’s Day. This was just to let them know that someone cares about them and that they are not for- gotten. I am not doing this for any other reason than to try and give back! As a mother of 3, I am humbled to do whatever I can to help. In return, it feels great to know that I am doing my part to help these women that have already been through so much!
Tap Here to Talk to Us
1 (888) 620-6745
Live Chat
Your door to a healthcare career starts here. Learn about our accelerated online/campus-based program and finish in less than a year ! *To learn more about COVID-19 and necessary health and safety precautions, you can obtain information on the CDC’s COVID-19 website..Learn More
+