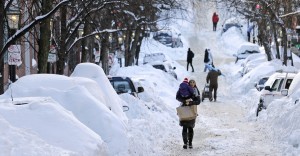 Did you know that you don’t have to live in the NY Metro area in order to take online medical billing classes with the Allen School?  Yep, its true!  You could live in Albuquerque, Alabama, Alhambra or even Alaska and earn your certification as a medical billing and coding professional with Allen School Online from wherever you happen to hang your hat. If where you happen to hang your hat happens to be in the City of Boston, MA, then some congratulations are certainly in order.  It seems that along with the last snowfall in Beantown, fell the City’s record for snowfall which as of this Sunday reached 108.6 inches for the Winter 2014-15 season, topping the earlier record of 107.6 inches set in 1995-96, according to the National Weather Service in Taunton. That’s a lot of snow for Bostonians to dug out of and trudge through on their way to school, work or both.  But not if said Bostonians were studying online medical billing classes online with Allen School.  Those students would be far less impressed with the record snowfall because they’d have much less need to get out of their houses for school.  Instead, they could simply whip up another batch of hot chocolate, flip open the laptop and get right to work studying for a new and exciting career while they wait for the valiant men and women of the Boston Public Works department to plough, shovel and salt the roads. So the bloggers here at the Allen School Blog offer congrats to Boston on setting this impressive record.  Online Medical Billing Classes however, remain unimpressed!