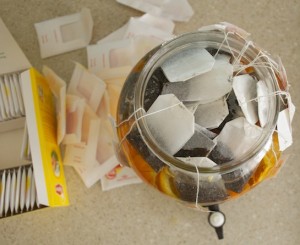 Cause of Bone Disease or Unassuming Beverage?

You remember the old joke about the man who goes to see his doctor and says ‘Doc, it hurts when I do this”, and the doctor says “Then don’t do that!”?  As a Certified Nursing Assistant, you’re bound to encounter some very strange and sometimes even comical maladies over the course of a long and prosperous career.  Of course, no one’s suffering is ever a source of comedy.  However, some cases are just so incredible that a retired CNA will surely have a volume or two of stories to make new CNA trainees smile. Consider this excerpt from a case recently publicized in LiveScience.com.

“A 47-year-old Michigan woman developed a bone disease rarely seen in the U.S. after she drank a pitcher of tea made from at least 100 tea bags daily, for 17 years, researchers report.  The Detroit woman visited the doctor after experiencing pain in her lower back, arms, legs and hips for five years.  X-rays revealed areas of very dense bone on the spinal vertebrae and calcifications of ligaments in her arm, said study researcher Dr. Sudhaker D. Rao, a physician at Henry Ford Hospital who specializes in endocrinology and bone and mineral metabolism. The researchers suspected the woman had skeletal fluorosis, a bone disease caused by consuming too much fluoride (a mineral found in tea as well as drinking water).”

This patient had literally made herself sick by drinking an incomprehensible amount of tea.  If you’re a practicing CNA, share some of your more memorably strange cases and experiences with those still involved in taking CNA training.  They’ll be grateful to hear about some of the more offbeat experiences they may have to look forward to.

One Response to “It Only Hurts When I do This”