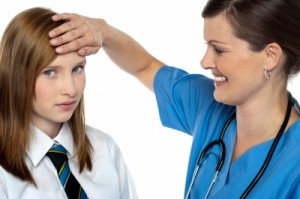 Nowhere is it more important to manage one’s temper and overall demeanor than in the role of medical assistant.  Medical assistants as well as most other healthcare career positions require a well-cultivated bedside manner.  After all, medical assistants and their colleagues routinely deal with people at their most vulnerable.  This would be difficult enough if not compounded by the fact that patients are often in a bad frame of mind precisely because they’re feeling vulnerable (not to mention the discomfort of their ailments). Like any other fields that require direct service to the public, medical assistants must become very good at maintaining their composure, even in the face of anger. nastiness, impatience and other negative emotions that may be inadvertently directed toward them during the course of their workday.  Dealing with this is not necessarily something included in medical assistant training.  But failing to manage one’s temper can certainly come back to haunt a person. This particular example illustrates the worst case scenario in this regard.  The story involves a man riding the Tube (the subway) in London one morning commute, when he finds his path is blocked by another man in the crowded train car.  The first man shoves his fellow “Tube” rider aside to pass by and lobs an “F-bomb” toward this obstructing fellow so as to punctuate his anger.   Later that day, upon arriving at a job interview, the angry rider came to the shocking realization that his interviewer was the very same man he’d cursed at in the Tube that morning. Moral of the story?  Learning to moderate one’s temper has a direct effect on one’s ability to land and maintain a job.  This is true in all fields, but especially true in the medical field.  Be nice to one another out there!