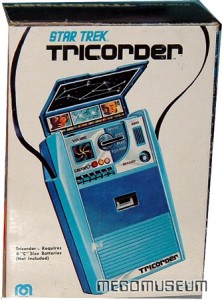 The nerds over at Popular Science (and I use that term endearingly) have been reporting on the so-called, “Tricorder X-Prize” which is a contest to see who can come up with the first no-touch medical diagnostic tool similar to the one used by the nerds on the famed sci-fi TV and movie franchise Star Trek.   Like the communicator (clamshell cell phone) and the 3D printer (replicator), many fictional technologies of the future as depicted by Star Trek over the last 40 years have made the jump from fantasy to reality.  The Tricorder X-prize is seeking to make reality of the fictional medical diagnostic tool first brandished by Dr. Leonard “Bones” McCoy, the Enterprise’s cranky chief physician.  As you might expect, in today’s futuristic world, there is indeed an app for that.  In fact, there are numerous ones, all seeking to master the technological requirements for capturing heart rates, blood oxygen levels, temperature and a host of other metrics.  The idea is to produce a home-use technology to help people decide if and when they need to go to the doctor or hospital.  As a medical office assistant or CNA, you know firsthand that many people come to the doctor when their symptoms don’t truly rise to the threshold of needing a doctor.  While in other cases, people ignore symptoms that truly require immediate medical attention, thereby worsening their prospects for speedy recovery from whatever ails them.  Furthermore, countless hours are spent on the phone with CNAs and other medical office staff talking through nebulous symptoms, trying to determine whether or not someone should make the trip in to see the doc.  With technologies like this, users can test and share the results with medical office staff who can then make more efficient and effective decisions about if and when to be seen.  Now if they can only realize the transporter system as seen on Star Trek, we could “beam” emergency cases straight to the ER when the patient’s smart phone indicates he is having myocardial infarction and not just gas.