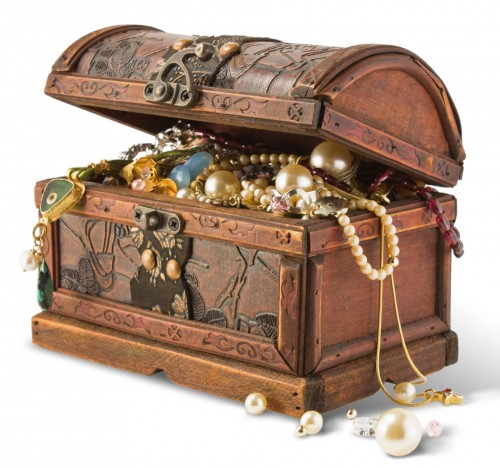 Indiana Jones wannabes would be inspired to read this interesting post on Gawker.com wherein a modern day treasure hunt was revealed.  According to Gawker, “A few years ago, Forrest Fenn, an art collector and antiques dealer in New Mexico, hid a treasure chest filled with $3 million in gold nuggets, ancient jade carvings, and other artifacts somewhere in the Rocky Mountains north of Santa Fe. In 2010, he self-published a book of clues as to its location, in the form of a poem, and tens of thousands of people have gone looking for it since.”  Fenn, now 85 years old, reports that although more than an estimated 65,000 people have gone on the treasure hunt (including one man currently missing in his pursuit of it), the treasure is still out there. In light of the fact that there is now a missing treasure hunter, Fenn has been pressed by some to assure that this is not just a hoax and that the treasure is real.  Gawker reports Fenn has affirmed the chest is real and not just a fanciful story.  “Some of the most wonderful things in the treasure are enormous gold nuggets the size of hen’s eggs, weighing more than a pound each, and worth several times their bullion value. He included things that would survive a long time, and that would be interesting and unusual. And the chest itself is quite rare; it’s a Romanesque lockbox from the 12th century, and with the gold and jewels inside, it weighs 42 pounds.” Before you pack your pick axe, climbing gear, compass and trail mix, consider a more pragmatic route to discovering your financial freedom.  Sure, it won’t come in the form of a gold nugget the size of a hen’s egg or housed in a 12th century Romanesque lockbox, but a new career in medical billing and coding can provide you with a lifetime of gainful employment.  Better yet, online medical billing classes do not require one to risk their lives rappelling into deep ravines, fording mighty rivers of rushing whitewater, or sleeping in freezing temperatures hundreds of miles from civilization.  In fact, online medical billing classes can be taken from the warmth and comfort of your own living room or wherever you have a good internet connection.  And while you won’t be able to retire wealthy on day one, as a medical billing and coding specialist, you’ll have the security of knowing you’re in a job and a job field that is stable and that work in said field is available nearly anywhere in the country you may wish to settle. So perhaps leave the treasure hunting to the Indiana Jones types, and focus instead on a slower, but more certain pathway to financial security and reward with online medical billing classes from the Allen School online!