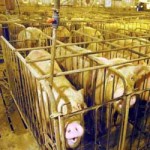 I recently had a beloved aunt pass unexpectedly and well ahead of her time, after contracting MRSA while in the hospital for a routine outpatient surgical procedure.   So I did a little research and found out an uncomfortable truth.  Follow me over the fold.  Methicillin-Resistant Staphylococcus Aureus or MRSA for short is a recently emergent antibiotic-resistant form of Staph infection.  Initially, it was accepted conventional wisdom that this tough-to-kill bacterial strain found commonly now in US hospitals, had arisen due to folks not completing their courses of antibiotic treatment for the regular bacterial infections they contracted.  Remember how your doctor always said, “Make sure to continue the full 10 days of treatment with this antibiotic, even if you’re feeling fully healthy after 5 days”?  The reason he or she always insisted on completing the course of treatment was because stopping halfway through the course of antibiotic treatment  (once your symptoms cleared) allows the strongest strains of the infectious bacteria in your body — that the antibiotic had not yet eliminated — to grow stronger and mutate into super-bacteria. Simple right? Logical to be sure.  However, there is more to the story.  Did you know that modern livestock farming techniques are heavily dependent on antibiotics?  Its true.  And not just to treat sick animals.  Modern techniques for industrial agriculture, by design, herd thousands of heads of cattle, pigs, chickens and other animals together in very small spaces.  In this way, the industrial farm optimizes the output required to feed the Earth’s skyrocketing population.  Since the animals are held unnaturally close to one another, it is very easy for infection to spread.  So industrial farms have taken to the practice of keeping all animals on a regular course of low-dose antibiotics – to prevent the outbreak of infection.  According to recent studies, this practice is much more likely to be to blame for the rise of MRSA.  After all, millions more Americans eat meat each day than visit hospitals.  And it is believed that the introduction of low levels of antibiotics into the daily food supply of  millions of people worldwide is the primary driver behind the spread of MRSA.  FDA research confirms that 49% of pigs and 45% of pig workers in the US harbor MRSA bacteria. Here’s the troubling part.  In April 2008, a high profile commission of farmers, doctors, scientists and veterinarians recommended that the FDA phase out the non-therapeutic use of antibiotics in farm animals.  The FDA agreed and announced it would prohibit the use of one antibiotic that was in widespread use on industrial farms.  Five days before the ban was set to take effect, the FDA quietly reversed its position.  While no official statement was released explaining this inexplicable about face, it is widely believed that the powerful farm lobby on Capitol Hill was behind the reversal. The decision to protect a narrow set of interests over the public health of the world’s population is a shortsighted one and one that may have been involved in the death of my sweet, departed aunt.  Have any of you or your friends/relatives been stricken by MRSA?  Share your stories below in the comments.

10 Responses to “The MRSA/Industrial Farming Connection”