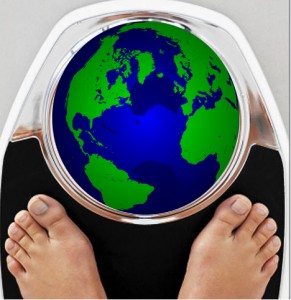 Allen School Online Blog frequently shares stories dealing with healthy eating (or lack thereof) and the ramifications our diets have on society and the environment.  So you can imagine how interested we were to find the following information courtesy of LiveScience.  We all know the developed world is struggling with the ravages of morbid obesity driven by increased access to nutrition, out of control portion sizes and dwindling levels of physical activity.  But nothing could have prepared us for the statistic showing that the entirety of global humanity currently weighs 17 million tons more than our collective body weight should be.  As their eye-opening article points out, this is the equivalent to having an extra 242 million people on the planet.  Its enough weight to counterbalance 170 aircraft carriers on the other side of the scale.  That’s a lot of body fat.  Too many KFC Double Downs and Taco Bell Doritos Tacos.  Of course, it is the US at the top of the list of most overweight nations.  Not surprisingly, the least overweight countries are found in Africa and Asia.  The serious health ramifications of such an overabundance of obesity pale in comparison to the inevitable ecological side effects we’re sure to endure as projected human populations add another 2.3 billion lives by 2050.  As medical industry professionals, students are certain to be involved in the front lines of the battle against obesity which is shaping up to be the number one health challenge of the 21st century.

4 Responses to “Time for a Diet”