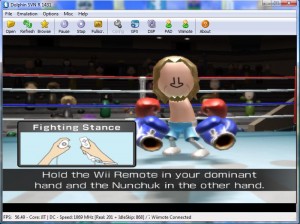 Well, I am a little late to the blog this morning because I have sore shoulders and elbows.  I owe this soreness to the time I spent at the Wii Sports Resort over the weekend.  We purchased Wii for our son this Christmas and it tripped my video game circuit which, while hardwired into every little boy, often switches off after about age 16 (right around the same time the driver’s license/girls circuit switches on).  Particularly, I found it viscerally gratifying to beat my video opponent mercilessly in Wii Boxing.  After about 12 fights of three rounds each, I collapsed with heavy arms and a good sweat worked up, back onto the couch.   Today, I am suuuuper sore.  But is it really exercise?  Follow over the jump for a report that answers the question. LA-based fitness professional Jill Brown has a post up over at the Huffington Post today about some of the testing she did on the Wii Fit.  Wii Fit is the game and attachments Nintendo markets as actual, physical fitness-boosting games.  Keep in mind, the boxing game I played is not for Wii Fit and is not really a “fitness” game per se.  Yet, I still cannot decide who endured the worse beating.  Me or my video sparring partner. Anyway, Jill Brown reports that the fitness value of Wii Fit is not commensurate with the real life fitness activities the game is designed to mimic.  However, I feel like the amount of work my muscles did was significant (based on the relative level of soreness I now endure).  Read Jill Browns article, “To Wii or Not to Wii” at Huffpo and then share your Wii experiences in the comments.