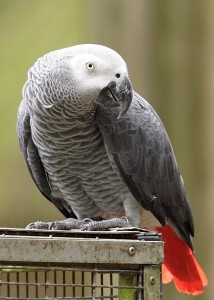 On those days when you start to feel that your coursework is taxing your brain, take a moment to think about Alex, an African grey parrot, who was the subject of a thirty-year (1977-2007) experiment by an animal psychologist named Irene Pepperberg, initially at the University of Arizona and later at Harvard and Brandeis University. Before her work, scientists believed that a large primate brain was needed to deal with complex problems related to language and understanding and that birds were not intelligent and only used words by mimicking. Pepperberg’s accomplishments found that birds may actually be able to reason on a basic level and to use words creatively. She reported that Alex had the intelligence of a five-year-old human and the emotional level of a human two-year-old at the time of his premature death (from an unexpected catastrophic event associated with arteriosclerosis) when he was about thirty years old (the average life span for African grey parrots is fifty years). At the time of his death, he could identify 50 different objects and recognize quantities up to six and could distinguish seven colors and five shapes. He understood the concepts of “bigger,” “smaller,” “same,” and “different,” and was learning “over” and “under.” Among a number of his skills, he had a vocabulary of 150 words and appeared to have understanding of what he said. He could label an object when asked about its shape, color or material. He could also add to a limited extent, and understood the concept of zero, answering “none” when asked the difference between two objects if there was indeed no difference! When the bird was tired of being tested, he would indicate that he wanted to go back to his cage by saying, “Wanna go back.” If he said, “Wanna banana,” and was offered a nut instead, he would stare in silence, ask for the banana again, or take the nut and throw it at the researcher before requesting the item again! And talk about “famous last words,”Alex’s last words to Dr. Pepperberg were, “You be good. I love you.”

8 Responses to “Are You a Bird Brain? You May Wish You Were!”