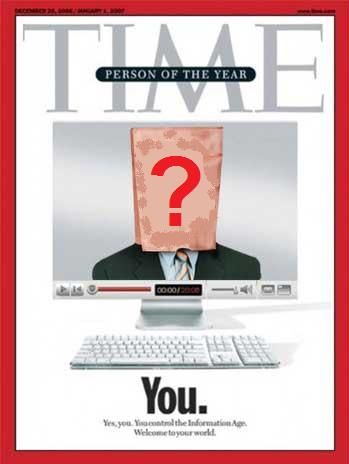 This morning, managing editor for TIME magazine, Rick Stengel announced the short list of contenders for this year’s TIME Person of the Year issue.  As in the past, recipients of this recognition are not always recognized for good works.  Sometimes they are recognized for the very damaging or disruptive actions they may have taken to propel themselves into the forefront of the collective psyche.  Follow me over the fold for the list, my thoughts on each person named and the opportunity to share your thoughts. In no particular order: 1)  Steve Jobs – Founder and CEO of Apple – A brilliant fellow who is responsible for my iPod Touch.  IMHO a worthy recipient whose drive and creativity has impacted the way the world computes and listens to music. 2)  Ben Bernanke – Head of the Federal Reserve Bank – A waste of oxygen who was either asleep at the switch while deregulation led to record Wall Street profits and the simultaneous collapse of the global economy or worse, was awake and complicit in the process; using his position at the helm of our banking system to enrich his former colleagues inside Goldman Sachs at the expense of just about everyone else in the world.  IMHO he should be in line for a cozy prison cell for his ignorance/complicity, not Person of the Year accolades. 3)  The Chinese Worker – One of the more esoteric possible choices for this year’s award (like 2006 when TIME named “You” as the person of the year) this is a nod to the role played by the average Chinese worker whose ilk has just transitioned from an agrarian based society to an industrial based one as more and more Chinese enter the middle class by working to satiate Americans’ unquenchable thirst for cheap crap at Walmart.  IMHO not a truly compelling choice for person of the year.  Even if it is 1 billion people of the year. 4) Nancy Pelosi – First Female Speaker of the US House of Representatives – A worthy candidate if for no other reason than for the gender barrier she broke by rising to this position.  While I am a fan of Ms. Pelosi, her positions (mostly) and her politics, there are many on the conservative side who loathe and detest her.  While I think those folks are wackos and reactionaries with very little basis of fact beneath their contemptuous arguments against her, IMHO, she is too polarizing a figure for the award. 5) General Stanley McChrystal – Leader of Allied Forces in Afghanistan – While I always have the utmost respect for those who serve their country in uniform, I think McChrystal is a flawed contender for two reasons.  First, he has not shown much by way of success in Afghanistan to date.  Granted it is a horrible mess and the last president allowed the Afghan conflict (the real source of 9/11 terrorism) to languish while he pursued conquest for oil riches or to avenge his father or whatever the insipid reason was for the war in Iraq.  But secondly, I believe that General McChrystal has been working to undermine the civilian control of the military that our founders wrote carefully into the Constitution.  His end run around the President, going to the media whining that Obama was taking too long to decide how to progress in this conflict, seemed too close to open insubordination for me.  IMHO, he may be a great general, but he’s not the Person of the Year. 6) Usain Bolt – Gold Medal Winning Jamaican Sprinter – I admire Olympic athletes and am always buoyed by the goodness of humanity that these games extract from our otherwise miserable species.  But I am not sure why his athletic achievement is so much more noteworthy than anyone else’s.  IMHO, uplifting but an underwhelming choice. 7) Barack Obama – President of the United States – The first black president of these United States and for that reason alone is worthy of this recognition.  However, just like the conferral of the Nobel Peace Prize, I feel like this recognition may be too premature.  I am not really very happy with the extent to which Obama has delivered on his campaign promises of “Change”.  After all, we still have the fools who wrecked the economy in charge of the economy (see “Bernanke” above), we just escalated the war in Afghanistan, the healthcare bill has been compromised into oblivion and is now nothing more than a giveaway to the murderous industry that reform was supposed to rein in, the war criminals from the last administration who rewrote laws to legalize torture and spy on Americans were allowed to walk without answering for their crimes, and I could go on.  IMHO, the jury’s still out on whether Obama is a great president or just a great politician. So if I had to choose, I would probably go with Steve Jobs.  I love my iPod! What are your thoughts on any or all of these contenders?  SOund off in the comments.  Don’t forget to tune into the Today Show on wednesday when TIME’s Person of the Year is announced.