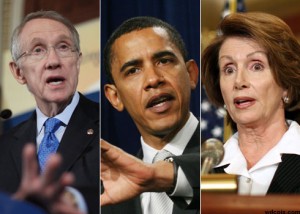 After the President’s televised, bi-partisan forum on healthcare reform, it still seems as if little has changed in terms of bipartisan support of reform efforts.  Republicans still hew to their position that Democrats in the majority ought to start  over from scratch after 60 years of debate and the last year of contentious debate on the Hill.  This is a ridiculous assertion given the decades of debate that have been dedicated to this single, very important issue.  It seems that the President held the forum specifically to give the minority Republicans the opportunity to take part in serious compromise discussions, offering to include tort reform – long a Republican issue – in the package.  What has become clear is that the Republican party (and to some degree democrats in the Senate as well) are under the thumbs of a powerful insurance lobby that doesn’t want anything to stand between them and the record profits they’ve been reaping by boosting premiums and cutting service.  So it looks like the Dems are finally preparing to go it alone.  Kudos to Obama for trying to seriously engage the minority in the planning.  To their credit, the Republicans have done an excellent job spreading disinformation about the bill.  However, when polled piece by piece, a plurality of Americans like and support the bill.  What are your views?  Do you think the President is doing the right thing?  Sound off in the comments. (Posted by remote from family vacation in Miami.  Limited internet access precludes images.)  Full scale blogging to resume Wednesday March 3rd.

One Response to “Dems Prepare to Pass Healthcare Reform”