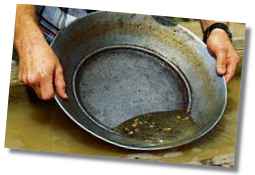 With a promising future in a growth field, most Allen School students are not fretting over their long term employment prospects.  Yet the overall poor state of employment in the US driven by the recession has left many without any solid prospects in the near term.  While most will wait it out, some have taken to a different type of “prospecting” – panning for gold in California. Yes it is true.  According to this article in today’s Washington Post, the mountains of California have seen a resurgence of Gold Fever at levels not seen since the famous Gold Rush of 1849.   It seems that for some folks, whose unemployment outlasted their unemployment benefits, the idea of panning for gold was a brilliant (ugh sorry for the bad pun) idea.  Typically in times of economic uncertainty, there is what investors refer to as “flight to security”.  This is when investors, spooked about the safety of traditional yet intangible investments like stocks and bonds, sell their equities and securities and reinvest the money into precious metals like Gold, Silver and Platinum.  The thinking is that if the economy gets dangerously bad, these metals will always have inherent and more importantly, tangible value.  This explains why today, gold is selling at better than $1000 per ounce and rising steadily. It is not a stretch then to understand why folks might be inclined – perhaps after losing job, home and possessions – to think panning for gold is a viable plan.  After all, you get to work outside in California’s beautiful mountains.  There is also a camraderie among prospectors and the potential (as slim as it is) to strike it rich.   But in the end, it seems far more prudent for those who may have lost a career in a hard hit industry like the finance or automotive sector to retrain and gain new skills to be used in industries poised for decades of growth.  Medical billing and coding is just such a vein to mine.  Your prospects for striking it rich are pretty good right here.