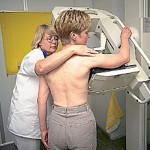 Sweeping new U.S. breast cancer screening guidelines are calling for an end to routine mammograms for women in their 40s and for women 50 to 74 they suggest a mammogram every other year.  This controversial new guideline was handed down by the United States Preventive Services Task Force (USPSTF),  a group of nongovernmental experts convened by the U.S. Department of Health and Human Services to review published literature and develop recommendations for the use of clinical preventive services.   Coming on the heels of the controversial Stupak Amendment limiting coverage for abortions that was inserted into the House healthcare bill in the eleventh hour at the behest of Catholic Cardinals, this new guideline seems to many to be a part of a broader campaign to hack away at hard-won women’s rights.

Up until this newly released report by the USPSTF, the American Cancer Society’s approved guidelines called for women to receive annual mammograms beginning at age 40.  For many, the news seemed to support an emerging pattern of sacrificing women’s’ health issues in the name of passing healthcare.  After all, you can be sure the health insurers are happy to avoid paying for a decade’s worth of regular mammograms for every woman in America.

While this is a logical assumption, I think it is an erroneous one.  For one thing, the USPSTF is not a partisan agency.  Click here for information on the USPSTF and you’ll see they are not promoting any agenda other than to weigh currently accepted preventative practices from all sides.  Why is this necessary?  The following quote from the Encyclopedia of Public Health kind of boils down the nature of such assessments:

“A recommendation to provide a preventive service establishes a policy that will apply to everyone. Airbags are a good example. All cars have them, yet very few people will have an accident in which airbags will function to save their lives. This situation is typical of most preventive services: The target condition occurs infrequently in healthy people. Therefore, many people are exposed to the risks of airbags for each person who survives an accident because of airbags. This example shows that a recommendation for a preventive service should have solid evidence that its benefits exceed any harms. This fact is the principal justification for convening experts to evaluate and using a systematic approach to this task.”

It seems that the purpose of reviewing the recommended age to begin regular breast cancer screenings is to weigh the benefits of beginning such screening at age forty against the potential downside of such practice.  Since the highest incidence of breast cancer begins in patients over 50 years old, the USPSTF is in essence saying that the risk to women younger than 50 is not sufficient enough to warrant screening through their 40s. In making its recommendations, the panel took into account the lower incidence of breast cancer in younger women and that screening younger women can lead to false alarms and unneeded biopsies.

In my opinion, an ounce of prevention is worth more than a pound of the cure.  So I fail to see what is gained by recommending women not be screened regularly at any age.  The American Cancer Society agrees with me and they have not amended their recommendations in light of the new suggestions provided to Health and Human Services.

What are your thoughts?  Share in the comments below.