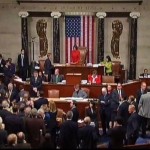 This past Saturday night, the  US House of Representatives worked all day and into the evening (it felt good to watch these people work on a weekend for once) and narrowly passed a bill aimed at reforming the broken healthcare system.  In the process though, they were forced to insert an amendment (the Stupak amendment) which disallows women who would be enrolled in the public option plan from getting abortions.  I am fed up with people inserting their religious preferences into legislation that effects all Americans, religious or otherwise. I respect anyone’s right to believe whatever they want about the issue of abortion.  If their religion prohibits them from having an abortion or their conscience or for any reason, they are free to avoid the practice.  But it is still a legal practice in all 50 states.  And as such, it should not be up to any group of religious-minded people to make restrictions in any legislation that would infringe on the rights of others to make whatever decisions they wish to make regarding their own bodies, within legal limits. Now I have heard the screeching from anti-abortion foes that, “We don’t want any federal money to go to support abortions because we have strong moral aversion to this practice and shouldn’t be forced to subsidize it with our tax money.”   While I am pro-choice in this regard, let me first say that I think abortions should only be performed in rare circumstances.  They should not be used as a method of birth control.    That said, I find this argument to be a weak one.  Here’s why: I am very much against the war in Iraq and and to a large extent, I am against the war in Afghanistan.  I hate that my tax money is sent in huge sums daily, to these two countries to kill people.   I am against the warrantless wiretapping of US citizens signed into law in the Patriot Act by former president Bush as it too offends my sense of morality. I felt that the big investment banks should have been allowed to fail and not bailed out by over a trillion dollars of our tax money.  I come down against the job destroying practices of so-called “free trade” agreements that our government signed at the behest of big corporations so they could legally outsource good American jobs to low-cost labor countries like China and Mexico.  All these things take my hard earned tax dollars and spend them on programs and pratices that I find morally reprehensible.  BUt guess what?  They are the laws of the land for now and as an American, I am obliged to respect them. That doesn’t mean that I cannot work to elect people who agree with me and work towards changing these laws.  But to insert into a healthcare reform bill, an amendment limiting a women’s right to choose to endure a legal medical procedure is a bastardization of the legislative process.  And it shows the overall disdain for our American system of governance. Anti abortion forces have tried unsuccessfully for years to mount legislative and judicial challenges to Roe v Wade (the Supreme Court case that legalized abortion).  Confronted with the majority of Americans opposed to such restrictions, they felt it was approrpriate to insert the amendment into the healthcare bill, knowing that reformers would swallow hard and vote in favor of it in order to secure the win on the important reform legislation.  That is unfair.  We are a nation of laws.  If you believe that God’s laws supercede the laws of man, that is your right.  But if you choose to live in a pluralistic society, the rights of those who believe in no God at all are equal to those who believe in God.  As such, if you wish to adhere to God’s law over the laws of man, then you should move into the wilderness and start your own society based on the laws of God.  I hear the mountains between Pakistan and Afghanistan are sufficiently wild and the folks there too practice slavish devotion to the laws of their God above the laws of society. What are your thoughts?  I respect all viewpoints, even those with which I disagree.  This is a thorny issue so please keep comments civil and supported by facts. Be sure to keep up-to-date with our blog, and check out our programs at the Allen School of Health Sciences.