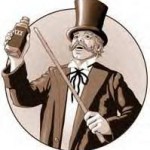 There’s an old expression used to convey the idea that what appears obvious is frequently the truth.  The expression goes, “If it looks like a duck, walks like a duck and quacks like a duck, then it must be a duck”.  Well, this bit of folk wisdom is not to be trusted.  Especially when it comes to the claims of, well, quacks!  That is, purveyors of bogus medical items.  From phony H1N1 “swine flu” cures online, to aisles upon aisles of homeopathic “remedies”, unregulated by the FDA on shelves in pharmacies across the country, people are frequently taken in by sales pitches that seem completely plausible. Now I am not saying there aren’t some non-Western or other homeopathic remedies for certain ailments.  I am certain that there are.  However, there are many people out to make a quick buck by exploiting people’s fears or taking advantage of their willingness to believe things which seem categorically believable.  Any scientist will tell you that just because something makes sense doesn’t mean it is true. It is the scientific process to test hypotheses, record the empirical data and draw ironclad conclusions based on the data.  This is why it is a bit disconcerting to see TV personalities like commedian Bill Maher or MTV host Jenny McCarthy making statements against vaccines.  While their “gut level” wisdom may seem quite easy to believe (in McCarthy’s case, she draws the correlation between the innoculation of her young child and the onset of his autism), it is not supported by science.  It is very damaging for them, with their wide broadcast platforms, to propagate such dangerous misinformation.  It is the public at large who suffers when too many people decide to forgo vaccination against treatable illnesses.   It leads to a more ready transmission of these illnesses amongst a less innoculated population. Worse than the Jenny McCarthy’s of the world who likely believe in earnest, are the quacks who bottle up sugar pills and sell them on eBay to folks desperate to find actual protections against the flu.  These quacks are the modern day equivalent to the “snake oil salesmen” of yore.  Recently, the Food and Drug Administration (FDA) has come out swinging against these charlatans, advising people to be wary of these scams. Even HHS Secretary Kathleen Sebelius has had enough of the baloney slinging of quacks and other “well meaning” anti-vaccination voices.  View this clip from her telling it like it is. Watch CBS News Videos Online If you want a great resource for “busting” this quackery and other medical myths, check out the Quackometer blog.  Lots of straight information there.