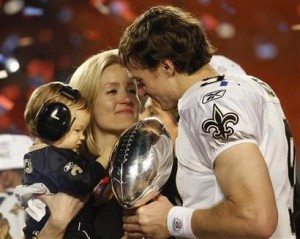 Congratulations to the New Orleans Saints on their epic Super Bowl win yesterday.  There was a lesson in perseverance to be learned through the remarkable achievement of Saints’ quarterback Drew Brees.  In short, the lesson Brees’s story teaches is to never give up working toward your dreams, no matter what the obstacles.  Follow me over the fold for the story. Drew Brees worried his career was over after sustaining a significant injury to his throwing arm at the end of the 2005 season.  Several clubs were not confident in his ability to recover and offered him less than he knew he was worth.  But Brees kept his eyes on the prize.  Some history on how Brees wound up in New Orleans courtesy of Wikipedia:

“In the last game of the 2005 season against the Denver Broncos, Brees injured his shoulder while trying to pick up his own fumble after being hit by Broncos safety John Lynch. Denver tackle Gerard Warren hit Brees while he was on the ground, causing the injury. Brees underwent arthroscopic surgery to repair the torn labrum in his right (throwing) shoulder on January 5, 2006. Subsequent reports mention additional rotator cuff damage. Brees was selected as first alternate to the AFC Pro Bowl team for the 2005 season. He would have played in his second consecutive Pro Bowl due to the injury to starter Carson Palmer, but his own injury dictated that the AFC Pro Bowl roster would have to be filled by second alternate Jake Plummer. After the season, the Chargers offered Brees a 5-year, $50 million contract that paid $2 million in base salary the first year and the rest heavily based on performance incentives. Brees took the incentive-based offer as a sign of no confidence by the Chargers and promptly demanded the type of money a top 5 “franchise” quarterback would receive. After the Chargers refused to increase their offer, Brees met with other teams. The New Orleans Saints and the Miami Dolphins were interested. New Orleans made an offer that included $10 million in guaranteed money the first year and a $12 million option the second year. Miami was unsure if Brees’ shoulder was completely healed and did not offer the money Brees was seeking. The Dolphins ended negotiations and traded for Minnesota Vikings QB Daunte Culpepper instead. Brees signed a 6-year, $60 million deal with the Saints on March 14, 2006.”

And the rest as they say was history.  Drew Brees never lost faith in his own abilities.  He stuck to his plan and found the best possible venue for his talents.  He went from being someone whose career was supposed to be finished, to a national champion.  The object lesson here is that no matter what career setbacks you may have sustained, you have chosen the right place to bring your talents.  The Allen School Online and the medical billing and coding industry is where you can really apply your innate abilities and grow to your highest potential.  It wasn’t easy for Brees and it will often be difficult for you.  But those who achieve the highest level of success always credit perseverance in the face of seemingly insurmountable odds in helping them to overcome and succeed.

5 Responses to “Perseverance – Drew Brees, the Saints and You”