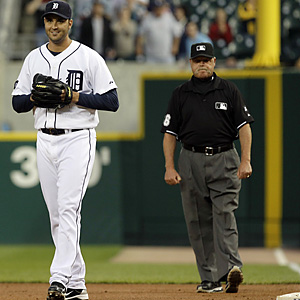 Our American society has been growing increasingly arrogant and ugly lately in this blogger’s opinion.  One need look no further than our politics, especially on the right, to see levels of disrespect ratcheting up to excruciatingly high levels.  But it goes beyond politics to infect other areas of our society as well.  From the wanton disregard we exhibit for our environment (see: BP oil-pocolypse) to the nasty stories about public figures captured by an insatiable papparazzi and a host of gossip TV programs and publications, our very American-ness seems to be coming somewhat unwound.  Leave it to baseball, the great American pastime to remind us all what grace, sportsmanship and aplomb looks like as many of us have seemingly forgotten.  The other day, Detroit Tiger’s pitcher Armando Galaragga – an immigrant to the US – pitched what should have been only the 21st perfect game in the history of major league ball.  In the last innings, the first base umpire blew a call, saying the runner was safe when replay clearly showed him to be out.  As a result, Galarraga’s perfect game was snatched from him.  Did this humble pitcher curse and spit and fume at the umpire for erroneously stealing his glory away from him?  Not at all.  A true asset to the great American pastime, Galarraga smiled and shrugged it off, maintaining a philosophical coolness about it that clearly demonstrates to baseball’s youngest fans (and really could serve to instruct many adults too) just what good sportsmanship looks like – American style.  Perhaps our leaders, both political and societal, could take a step back from their mendacity, rhetoric and invective to remember that we’re better than the pettiness and arrogance we’ve been exhibiting in the 21st century.  Perhaps this act of good grace can serve as a model for us to find our way back to the country and society we used to be – one that placed people before personalities and the welfare of the group above the enrichment of the individual.  Click here to read the entire uplifting story.

2 Responses to “Remembering How to be American”