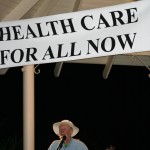 Last night, I attended a pro-reform rally at Memorial park in Nyack, New York along the banks of the Hudson in the shadow of the picturesque Tappan Zee Bridge.  Nearly 1000 people turned out to support reform of the broken healthcare system and several musical acts donated their performance to rally the crowd.  The top act was none other than the legendary proponent of social justice, Pete Seeger.  Follow me over the fold for more details about the evening’s events and photos taken by yours truly. Aside from perhaps a dozen “astroturf” protestors (the opposite of organic grassroots activism) bussed in from communities many miles away, the crowd was enthusiastically supportive of the reform proposals including many proponents of the public option and single payer plans.  The speakers included US Congressman, Elliot Engel as well as a woman who has been a health insurance company executive for twenty years.  While I cannot remember what her name was, her insider’s perspective was invaluable as she ran down why the proposed “compromises” such as health insurance co-ops and exchanges would not accomplish the goal of bringing healthcare costs down to acceptable levels.  She also explained how President Obama’s seeming support of “mandates” which would require all Americans to purchase insurance or pay a yearly fine for failure to do so (think auto insurance) would be a boon to the insurance industry while doing nothing to lower costs.  Her point was that mandates alone, without at least a strong public option to force private insurers to compete, would be nothing more than a giveaway to the insurance companies.  This is exactly what the state of Massachusetts has in place right now.  The Bay State is often held up by the critics of healthcare reform  as an example of why “universal healthcare” cannot work.  In this instance I agree with them.  Mandates, without providing an affordable, government subsidized option, are coercive and boost the wellbeing of private insurers at the expense of the hardworking taxpayer.  The highlight of the evening came beneath a full, harvest moon rising over the Hudson, when Pete Seeger arrived, about a half hour late.  The 90 year old folk icon – a man who sang and played with Woody Guthrie, served in WWII, helped restore the environmental health of the Hudson River, and championed countless causes of environment, civil rights, human dignity, social justice, peace and love – was late because he had performed two other events the same day.  One in his hometown of Beacon, New York (about half an hour north up the Hudson) and a second one in New York City’s Central Park (about an hour south down the Hudson).   Even for a spry, 90-year old, this is something a a feat.  Donning his trademark banjo and hat, Pete brought the crowd to its enthusiastic feet with songs that all knew and sang along to including Woody Guthrie’s American anthem, “This Land is Your Land”.  It was a marvelous event and it was excellent to see so many people gathered in support of health care as a basic human right.  Here are some photos I took at the event.