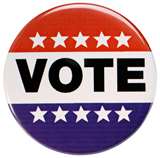 Unless you’ve been under a rock for the last few months, you’ve seen the unbelievable amount of money spent on campaign advertising.  This year a record $4billion is being spent on campaign ads.  I know of a million ways (at least) that the $4billion could have been spent better.  But alas, this is the system we have.  So let’s make it worth it for all the cash that would otherwise be a complete waste and get out there and  VOTE!  Don’t forget, many generations of Americans laid down their lives to protect your right to vote.  So honor those who have fallen by exercising your franchise and make your voice heard.  Tomorrow, November 2, is Election Day.  Go and pull the lever for the people you feel best reflect your values.  Or at least, vote against those whose values run counter to you own.  It is your most precious right as an American!
Tap Here to Talk to Us
1 (888) 620-6745
Live Chat