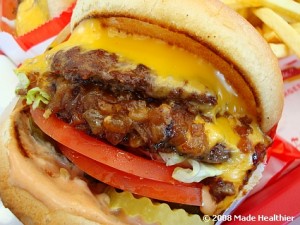 According to the New York Times, the beef industry has initiated no less than 52 recalls of beef for contamination with E. Coli and other harmful bacteria.  It seems like we hear stories with more startling regularity about how our food supply is inadequately monitored leading to sickness and death.  Remember the tainted spinach last year?  The deadly burgers from Jack in the Box the year before?  Well, there are some interesting developments on the horizon that may make your double double “animal style” a little less likely to kill you.  Follow me over the fold for the “meat” of this story (sorry, couldn’t resist on a Friday afternoon). Large scale testing of a bovine vaccine to protect cattle against E. Coli is finally under way after bureacratic delays in Washington were swept aside.  The New York Times reports: “In an effort to counter the threat, two vaccines have been developed commercially. One, made by a Minnesota company called Epitopix, received preliminary approval from the Agriculture Department in March, meaning it can be sold while research continues. Dr. James D. Sandstrom, general manager of Epitopix, said that about 300,000 head of cattle will get the vaccine in the coming months as part of a series of large trials. A second vaccine has been developed by Bioniche Life Sciences, a Canadian company. It was approved for use in Canada last year and is awaiting approval in the United States. Both vaccines spent years tangled in Washington red tape, largely because they straddle the border between animal medicine and human health. ” Food poisoning from deadly strains of E. coli, mostly the O157:H7 variety, has become a recurring problem. The strain is responsible for an estimated 73,000 illnesses and 61 deaths across the country each year. Do you think the government is doing enough to ensure that food producers are doing enough to protect our food supply?  Got a favorite burger joint to share with me?  (As you can tell, this New Yorker MISSES In-n-Out Burger from California.)  Sound off in the comments.

6 Responses to “Vaccinated Burger With Cheese Anyone?”